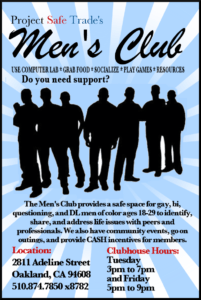 The men’s Club which is an education and prevention program located within CALPEP. Our target population is young gay, bisexual, down-low and questioning individuals ages 18 to 29. We provide a cash incentive of $10 for the entry survey and they will also get another $10 for doing the HIV and HEPC tests. Once you become Men’s Club member you will be eligible for a monthly stipend of $40 for coming into the center once a week. Services include case management, substance use counseling and treatments plans, peer groups, and mental health therapy. We also go on trips, outings and have monthly events. Contact Roman at CALPEP 510-874-7850 x 8782

African Americans continue to experience the greatest burden of HIV compared to other races and ethnicities. Hispanics/Latinos are also disproportionately affected by HIV. In 2014:

Laboratory and real-life studies of couples in which one partner has HIV and the other doesn’t show that condoms are highly protective against HIV when used correctly and consistently.
– National Institute of Allergy and Infectious Diseases

Donate To This Service!

Our Philosophy is to provide accessible health education to reduce sexual risk, prevent disease, link individuals to health care, treatment and support services. We respect both language and culture of those we serve.

"Each one, Teach one"

Visit Us In Person